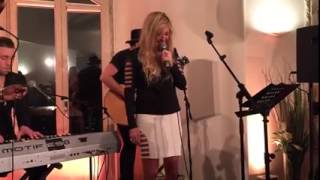 She topped the chart with this song for FOUR months however it's only until today that a video has emerged of the singer performing it live.

When 'Fifty Shades Of Grey' released the songs from their soundtrack there were a few that really stood out but none more so than Ellie Goulding's 'Love Me Like You Do'. The platinum haired singer spent a staggering FOUR weeks at No.1 with the hit however we can't recall any times that she has sung it live?

However yesterday a video emerged of Ellie singing the song during the 'Mobile World Congress' (a conference for all things mobile gaming) at a private event for HP in Barcelona.