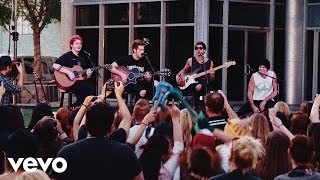 Calum, Ashton, Luke & Michael have released an exclusive video from their first ever Derp-Con.

The 5SOS boys performed their hit single 'Good Girls' at the L.A leg of their first EVER Derp-Con and it's awesome. The Aussie rockers stripped the song back to basics with two acoustic guitars and a bass. Ashton opted against using his drum kit and instead tapped away on his stool as a swarm of young fans watched on.

Derp-Con allowed fans from all over the world to fly in to L.A and see the boys in the flesh. Fans were able to hang out with the band as well as watch several live performances over a two day event.