Shawn Mendes and Camila Cabello's 'Señorita' collaboration is Number 1 in the UK for a second week.

It comes as Shawn and Camila were spotted out together holding hands, further fuelling those dating rumours.

The track had to fend off competition from Ed Sheeran, who had a massive four songs in this week's Top 10.

> 5 Seconds of Summer reveal their worst song ever

'Beautiful People' with Khalid was Ed's highest charting song, which remained at Number 2 on The Official Big Top 40.

There were two New Entries from Ed - 'BLOW' with Chris Stapleton and Bruno Mars and 'Best Part of Me' featuring YEBBA.

The American star explaining how the smash-hit song came about and when exactly he started riding horses.

There were also New Entries this week from the likes of Kygo, Dave, Post Malone and Tom Walker. 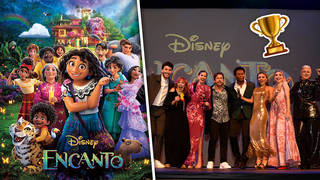