Ariana Grande has released the official music video for her new song 'breathin'' and it doesn't disappoint.

The music video sees Ariana walking slowly through a crowd as the people rush by alongside her.

> Who Are The Ex-Boyfriends In Ariana Grande's 'Thank U, Next'?

'breathin'' is the next song to be taken from Ariana's fourth studio album Sweetener, released in August 2018.

It follows previous singles 'God is a Woman' and The Official Vodafone Big Top 40 Number 1 song 'No Tears Left to Cry'.

breathin video by @hannahluxdavis out now 🖤

The singer has been busy in the studio recently and is rumoured to be bringing out her fifth album before the end of 2018.

It comes after a new album of unreleased Ariana songs was leaked on streaming services around the world.

The album 'Nobody Does It Better' was listed under the artist name Zandhr rather than on Ariana's own channels.

It included a studio version of 'Better Days', first performed at the One Love Manchester concert, and an Ariana and Diplo collaboration called 'In Your Hands' that was teased by the pair back in 2016. 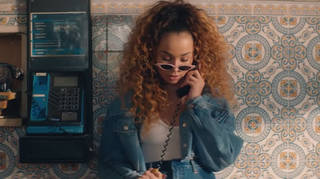